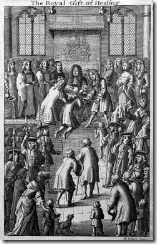 The Eighteenth Century in England was the Golden Age of Quackery, with London being a world capital for mountebanks, charlatans and other practitioners of irregular medicine. Consumers in Georgian England had access to an unparalleled selection of medical entrepreneurship from regular doctors, lay quacks, foreigners with exotic elixirs, and even preachers such as John Wesley (as we saw a few weeks ago). So popular were these various tonics and treatments that it has been claimed that many newspapers would have gone bankrupt without the advertising revenues from quacks. Indeed, the proprietor of the Reading Mercury, used his proud organ to sell his own Fever Powders.

This thriving market was in stark contrast to many continental countries where quacks were often hounded out of both their establishments and their countries. Samuel Hahnemann, founder of homeopathy, and Mesmer, inventor of animal magnetism, were both forced to leave their home towns in search of more accepting jurisdictions. London was often the home for the displaced medical salesman.

The reason for this open market in quackery can be traced to the rather weak position of the regular physicians guilds and societies who failed to gain a real monopoly on the healing arts. The three main establishment bodies, created in the Tudor period, were the Royal College of Physicians, who looked after university educated medics, the Barber-Surgeons, and the Society of Apothecaries, the forerunners of the pharmacists. These bodies gave licenses to practice and prosecuted those who transgressed. However, Roy Porter, in his book Quacks, describes how this authority was systematically undermined.

Under Elizabeth, James I and Charles I, a fairly tight lid was kept on medical pretenders. However, after the civil war, the various trade guilds were too closely associated with royal patronage and Charles II, in a twist of irony, managed to exploit the new zeitgeist to his own ends. He used his newly restored royal powers to subvert the licensing scheme by shamelessly issuing his own medical patents that gave nostrum sellers exclusive rights to peddle their powders. This practice grew rapidly under Charles II and subsequent monarchs. Anyone could create a new quack concoction. They simply had to register their unique ingredients with the patent office. Importantly, they did not have to provide any evidence of any sort that their medicine actually worked. The license then gave them exclusive rights to peddle their cures and access to the courts to prosecute anyone who copied them.

This licensing essentially emasculated the power of the medical societies to stamp on quackery. A double standard was created and the quacks exploited their royal blessing to the full. As Porter describes,

…quacks could actually bask in official approval of a kind, much to the faculty’s fury… All these state interventions were represented by empirics [quacks] as tokens of royal blessing, the highest of all testimonials.

‘By Royal Appointment’ was the stamp of approval on these ‘licenses to kill’ as they were called at the time.

The effect of these patents on the public were not medicinal but commercial. Before Charles II, the quack was typically a foreign mountebank, dressed in a ‘zany outfit’, and set up a market stall to sell a few bottles of their elixir. With a patent, the business turned into an industry of mass production with household brand names, marketed effectively in the newspapers, and selling in quantities of millions. Quackery blossomed on the emerging consumer society, and the undermining of the medical establishments created a thriving free market for medicine in England. Many became very rich on the back of their patents and the Crown enjoyed a healthy income from the levied stamp duty.

Charles II was interesting, not for only creating a legal framework for quackery, but for also for taking a very personal interest in unorthodox medicine. Indeed, Charles was to become the de facto head of the lay medical trade. He entertained in his court characters such as the Irish spiritual healer, Valentine Greatrakes (also known as ‘the Stroker’) who claimed he could cure all manner of diseases by laying his hands upon them. Even more wonderfully, Charles revived the practice of laying his own Royal hands on the sick in order to cure them of diseases such as scrofula (a manifestation of TB). More commonly, Charles would use Touch Pieces, coins he had handled and then given to the sick in order to minister his healing gifts. In 21 years, he ‘touched’ over 91,000 people.

Now, in the 17th and 18th century, it would be quite possible to argue that the King’s licenses merely created a level playing field amongst medical practitioners, destroying the vested interests of an Oxford and Cambridge educated elite, and gave the people what they wanted: their consumerist right to have their choice of cure. Indeed, the doctor and the quack both had little to offer the seriously ill person at the time and almost all practices would be judged as quackery by modern standards. Today, we are lucky to be one of the first generations to live in an age of scientific medicine, where we have a deep understanding of the causes of many illnesses and the tools to measure which treatments actually work and are safe. Medical regulation becomes meaningful now that we have objective standards by which we can judge competency and skill. It is therefore rather incredible that this 17th Century Royal tale appears to be replaying itself in the 21st Century.

Prince Charles, heir to the throne, is the modern day head of British alternative medicine. He has set up a campaign and lobbying organisation called the Foundation for Integrated Health, which promotes the wider acceptance of quackery in British life – he calls it ‘integration’. Charles prefers magic homeopathic sugar pills to magic coins. Both though are equally as ridiculous.

He promotes his own elixirs, through another company of his, Duchy Originals. In order to do so, he lobbied the Department of Health as part of their enquiry into allowing more lax regulation for herbal medicine. He obtained one of the first licenses from the MHRA and launched his Duchy range of herbal tinctures. I complained to the Advertising Standards Authority about them and they found Duchy Originals to be making misleading and untruthful claims.

Much more worrying than these ridiculous potions is that fact that Prince Charles is directly involved in trying to establish new double standards in the regulation of medicine in the UK. Just has his namesake did, he is attempting to create new backdoors to allow mountebank practitioners to practice medicine without any of the ethical demands placed on real doctors. His Foundation was given money by the Department of Health to establish the Complementary and Natural Healthcare Council (more commonly known as Ofquack). This body offers voluntary regulation to a range of quack practitioners. There is no need for these practices to have any evidence base – the CNHC will just certify they have been well trained in their nonsense and give them the Royal and governmental stamp of approval.

Not satisfied with this, he is now lobbying the government to provide even more regulatory protection to herbalists. This has been planned for the best part of a decade now with the government trying to work out how to best protect the public by the dangers posed by unproven herbal remedies. Unfortunately, they appear to be going along with the idea that the way to do regulate pseudo-medicines is the same way you regulate real medicine. The much derided Pitillo Report recommended that Herbal Medicine practitioners be statutorily regulated and have protected title. The report made the fundamental mistake in that assuming a well trained herbal practitioner was a safe practitioner. However, it has never been explained how a training in nonsense can be considered a competent training. Indeed, Professor Colquhoun has exposed how such training is positively dangerous.

Nevertheless, the Prince’s Foundation has leapt on this report with relish. They are pushing hard to allow herbalists to have their own protected status. Matters have now come to head after the same College of Physicians having come out strongly against such regulatory moves. They say,

Statutory regulation of herbalists and Chinese medicine practitioners is ‘completely inappropriate’ and will put patients at risk. “Herbal and traditional medicine which are largely or completely of unproven benefit should be regulated in terms of consumer protection.”

The fear is that such regulation will not prevent the public from being exposed to dangerous practices, but instead give pseudo-medicine a false veneer of respectability and acceptance.

The Prince’s Foundation has not taken the College’s intervention lying down. They have accused the physicians of “washing their hands” of protecting the public. Of course, this is not true. They have stated that such protection should come through existing consumer protection laws, not through state recognition of their status. In other words, herbalists should be prosecuted for making misleading claims or importing dangerous concoctions. Interestingly, Dr Michael Dixon, one of Prince Charles’s chief apologists, views the disagreement in 17th Century terms of the College trying to protecting a ‘trade monopoly’ as doctors. He fails to recognise that, in the 21st century, monopoly in medicine should come through evidence and reason, not regulation or commercial success. Dixon points out that herbalist do cause deaths through inappropriate and dangerous concoctions but offers no evidence to suggest that this was from an ‘uneducated’ minority. Irresponsible and deluded education in alternative medicine is the problem, not the solution.

The Foundation accused its detractors of “abandoning the public to quackery”. Professor George Lewith, another prominent proponent of unproven treatments, says,

Failing to introduce statutory regulation will amount to a Quack’s Charter. It is the incompetent and the irresponsible we need to stop. Not the well-trained, dedicated herbalists who put their patients first.

It is difficult to see how he could be more wrong. Introducing new regulation will indeed be a quack’s charter. How can using existing regulation to stamp out misleading and dangerous quackery be a ‘quacks’ charter’? Prince Charles’s friends need to show how recognising herbalists training will protect the public when it is likely that it is this very training that presents the clearest risk by indoctrinating students with nonsensical ideas about medicine, science and evidence.

Lewith’s aversion to the uncomfortable truths of medical science is made clear by his statement that “Those who oppose statutory regulation should consider the needs of the public and patients first, rather than the status of medical professionals or impractical notions about so-called science.”

The problems with statutory regulation are laid out very clearly on the dcscience web site from a rather good submission to the Department of Health. The Prince’s Foundation has yet to answer any one of these important criticisms and instead resorts to the usual quack trick of misdirection and obfuscation.

Prince Charles’ meddling represents one the greatest threats to the control of dubious medical practices since his namesake’s very similar personal interference. It is clear he wants to create a new golden age of quackery where modern scientific medicine is forced to compete (‘integrate’) with irrational nonsense, where the distinction between evidenced interventions and quackery is blurred by obfuscating regulation. History shows that creating double standards and allowing unfettered free markets in medical practices results in the exploitation of the public by deeply deluded or unscrupulous quacks. Pretending that freedom to practice, after licensing based on nothing more than unevidenced assertion of competence, protects people from harm is so obviously wrong. Let us hope that the government learns the lessons of history and ignores their current meddling Prince.

5 Comments on Meddling Princes, Medical Regulation and Licenses to Kill