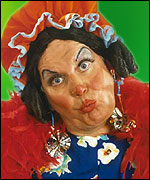 Welcome to the New Look Quackometer

What is the Quackometer?