In my last post I discussed how Hopi Ear Candles has nothing to do with the American Hopi tribe and was a technique that had only been scalding ear drums since the Eighties. Quackery likes to sell itself on its ancient roots and traditional heritage. But, by the looks of it, most quackery techniques have much more modern roots. Someone emailed me to ask if I could expand on this, so here goes:

Reiki
Reiki is a technique that claims to be able to channel healing energy from the ‘cosmos’ through an ‘attuned’ practitioner, and into the customer. Its language is that of mystical cosmic energies and draws on its Eastern origins. In fact, Reiki was invented in 1922 by Usui-Sensei and has been criticised as being little more than a pyramid scam where ‘attuned masters’ get paid to ‘attune’ new recruits.

Reflexology
The belief that feet are connected to the rest of the body through some sort of life force and that massaging the right part of the foot can affect diseased organs goes all the way back to the 1930s and was largely invented by an American, Eunice Ingham. It is not recorded if she had a foot fetish.

QiGong
The belief that cosmic qi can be drawn through the body through regulated breathing exercises and movements to produce healing has its origins in the 1950’s. Mao’s China saw the revolutionary Chinese medical establishment, concerned with the Westernization of medical practice in China, create a popular spiritual healing technique. It did not take off though as a mass movement until the 1980’s. Expect to see it as an Olympic sport this year.

Applied Kinesiology
AK is a practice of diagnosing illness by testing muscle strength when presented with various chemical or nutrient challenges. The mere presence of an allergen in a nearby bottle can weaken muscles, apparently. This bogus technique was utterly made up by a chiropractor in 1964.

Bach Flower Remedies
The belief that doing weird things with flowers and brandy in order to capture their ‘energetic signature’ comes from the 1930’s. It was made up by a homeopath from Oxfordshire. As Nigella Lawson’s late husband so wisely said, flower remedies “make perfect sense on a sort of flowers-are-harbingers-of-good level which wouldn’t have grasped the public imagination quite so forcefully, I imagine, if (Dr Bach had) used 38 types of spider to produce the Bach Spider Remedies.”

Aromatherapy
Whilst scented oils have been in widespread use in many cultures for many centuries, aromatherapy was invented by a Frenchman in the 1920’s. The french chemist burnt his arm in a laboratory and plunged his arm into the nearest vat of liquid which happened to be laveder oil. From the single unusual event, the generalised technique of Aromathérapie was born, although plunging arms into vats is no longer necessary. Sniffing will do.

Homeopathy
This technique is the oldest so far with its roots in early 19th Century Germany. Despite its Teutonic origins, homeopathy likes to define itself in opposition to ‘Western’ medicine. Samuel Hahnemann was experimenting with Cinchona bark as a cure for malaria. When he ingested it, he noticed he got quite ill. Some have suggested he was allergic to chemicals in the bark. Again from a simple false attribution, a whole multi-million dollar industry of delusion was born.

Osteopathy and Chiropractic
These ‘Bone Doctors’ are inventions of the late 19th Century. Andrew Taylor Still invented osteopathy in the 1870’s and said he could “shake a child and stop scarlet fever, croup, diphtheria, and cure whooping cough in three days by a wring of its neck”. Had he been watching the Victorian Simpsons? Chiropractic was based around the invented idea of ‘subluxions’ – blockages in the bones that caused all illness. Despite millions of X-rays inflicted on customers by chiropractors, no subluxions have ever been seen. Bone doctors are one of the few fully regulated quacks in the UK. Some chiropractors did not like this step and set up on their own over the past decade or so, and changing their name to evade the law of having to be registered. I will not mention them because they are attention seeking half-wits who would love the publicity.

Acupuncture.
This is quite an interesting one and getting clear information is quite difficult. Advocates claim that acupuncture has roots in China going back many thousands of years. However, early forms look like they were more like bloodletting, using blades instead of needles. The main development of the techniques appears to have taken place over a few hundred years up to the Seventeenth Century before going into rapid decline. Acupuncture was once again revived during the Cultural Revolution by Chairman Mao in the 1950’s as part of his (possibly cynical) plan to create a distinct ‘Traditional Chinese Medicine’ that could be quickly delivered to the vast population. The ‘barefoot doctors’ were given crash courses in acupuncture and herbal remedies and sent out into the countryside of China. A few decades later, every high street in the UK has a branch of Mao’s new medicine. That is a long way to go barefooted.

Of course, many alternative medicine practices may indeed have very old roots. Finding reliable information on this is quite hard as many histories are written by advocates and do not provide a dispassionate view. Ayurveda may well be a truly ancient practice. Herbalism, in its many forms, undoubtedly has roots in pre-history, although evidence that there is a consistent and continuous belief in the philosophies and the nature of remedies looks unlikely. As I have discussed before, herbal remedies look as if they may well have stronger cultural meanings than medicinal meanings and the attributed effects of herbs appear to change across times and geography.

What we see is that the vast majority of quackery is a recent invention that only pretends to have ancient roots. Just like the ear candles we saw last week, alternative medicine has thoroughly modern origins and so we are truly living in the Age of Quackery right now. 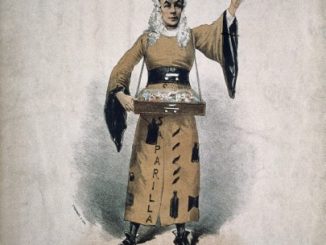 Top Ten Tips For Creating Your Own New Alternative Medicine

The Quackery of Torture

15 Comments on The Age of Quackery