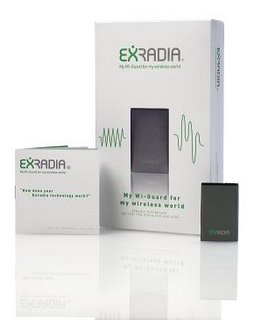 I’ve been writing rather a lot recently about the quackery that surrounds the whole question of whether electromagnetic emissions are harming our health. Apologies. But it is quite interesting to witness a new form of quackery being born. What has been interesting so far is how the alternative medicine camp have been jumping in on the scare and offering all sorts of bonkers products, along with their potty theories about the harm caused and pet theories of how to ‘heal’.

Most of these quacks have been fairly small business affairs, but quackery is by no means limited to cottage traders. Big money is just as keen to fleece money from the unwary. Look at some of the biggest UK companies like Boots the Chemist and their range of quack products. Clarins, the huge French cosmetics company, is already trying to make money from the fear of radio waves with daft, pseudoscientific products.

So, the ever more bonkers Independent introduces us to Exradia – a new company start up, offering patented ways of protecting us from the ‘harm’ that is caused by mobile phones. They have a product called the Wi-Guard. Nice. Unlike, some of the other outfits involved in this scam, Exradia are doing a ‘proper job’, with lots of money spent on their web site, graphic design and product marketing.

The company has been set up by people with apparent City credentials. Their chairman, Asher Gratt, sold a telecoms business to British Gas for many millions. Their CEO, James Fintain Lawler, was CFO at Xerox EMEA. Other executives brought in represent a team ready for large scale global logistics, distribution and partner channel sales. They mean business.

The basic premise behind the business is that they have developed a mobile phone battery that is allegedly capable of making the electromagnetic emissions from a mobile ‘harmless’. I will explain a little more about how the battery supposedly works in a moment, but it is worth reflecting on their business model first. Exradia, although making a nod to retail sales, are much more interested in striking deals with mobile phone manufacturers and operators. The reason for this is obvious. There are more mobile phones in the UK than people now (many people have more than one phone) and they replace their phones every 12-18 months. New phones need new batteries and if that battery is an Exradia magic battery then the total annual revenues would be approaching a billion pounds (assuming the battery sold at full retail value of about £30). Scale that business across Europe and you are talking serious wonga.

The trick is of course to persuade the Nokias, Sony Ericssons, and LGs to use your magic battery. And this is where Exradia are laying on the fear. Their corporate presentation compares the dangers of mobile phones to the dangers of smoking. “Look what has happened to the tobacco companies with all their law suits. Do you want the same thing to happen to you?”. If the handset manufacturers take the precaution of installing ‘protective’ batteries then they can be seen to be taking their customers’ concerns seriously and so mitigate the risk of future potential claims.

Guy Kewney in the Register writes that this might be the mobile phone industry equivalent of the airlines’ life jacket. Guy points out that the life jacket has not saved a single life, but an airline would be mad not to push them under the seat. Think of the law suits again. However, life jackets have the potential to really save lives and no one doubts that. But does this battery save lives? Should the mobile phone manufacturers put one in just to be on the safe side? Or, is this more akin to putting a flying carpet under the seat of every passenger?

However, this is not your typical vitamin pill sales person selling the odd fraudulent qlink pendant. This is a business being done by people who know the value of a scalable and leveraged business model, who understand the value of a patent and are prepared to take a risk. Unfortunately, I have a feeling that this is also a business being run by people who don’t understand science. None of the executives on the web site appear keen to flaunt any science credentials.

The big question is then is how this new technology is supposed to work? There is nothing quite so crass as the qlink’s appeal to quantum theory, or Subtle Field Technologies clueless flaunting of its ‘holograph field’. Instead their web site leads to lots of dense explanations and sciencey looking research papers explaining how we are being harmed and how we can be saved. The only problem is that its a pretty incoherent set of explanations.

Let’s do a one minute reminder of what we are supposedly trying to protect ourselves from. First, there are the people who claim to be electrosensitive, that is they suffer a range of symptoms, including headaches, lethargy and concentration problems, when they are in proximity to Wi-Fi routers and mobile phones. But it is almost certain now, due to the large numbers of studies done, that the radio waves from these devices have nothing to do with their symptoms. More alarmingly are reports of electromagnetic waves causing cancer. The best evidence to date shows that there may be a slight risk from overhead power cables of causing leukemia in children. The evidence is not conclusive and there may well be evidence that the extra cancers have nothing to do with magnetic fields. But if these findings are confirmed, then it would still only correspond to an extra death per year.

So, what do Exradia say they are doing science wise? Apparently, their sister company in the US explains that the harm does not come from the radio emissions from the handset, but the background low frequency (ELF) emissions from the battery and electronics. This would explain why all the studies flaunted by the company appear to be of mains frequency emissions, i.e. 50 or 60 Hz. This is far below the frequency range of Wi-Fi and mobiles. The company explains how our bodies are used to being in noisy background ELF. Electronic devices introduce ‘coherent’ signals that can apparently jiggle around with our cells mechanics. Introduce another random field and the coherence is lost and our cells are safe. The magic battery does just this – allegedly.

It all sounds very technical and scientific but this is fringe science stuff. We have previously seen how this sort of ‘subtle effect’ is attracting all sort of quack devotees. The company are keen to show how the US military developed this technology (always produces loud clanging sounds on the quackometer) and how many studies are backing this up. Unfortunately, as far as I can see the studies appear to be the usual array of irrelevant, incoherent and surrogate studies that litter this space. What is more, one of the names that appears very frequently, Theodore Litowitz, also appears to be a patent holder in this technology. It all raises so many questions. If the main radio frequencies are not doing the harm, then what are all the anti-mobile campaigners banging on about? If is is the 50Hz emissions that muck around with our cells, why concentrate on phones when the mains is dumping out this stuff? The problem is that the ‘coherence’ theory of electromagnetic harm is only matched by the incoherence of their explanations. Having people write papers is one thing. Getting it all to fit into consilient science is another.

I hope the due diligence the Exradia investors did on the business model was better than the due diligence done on the science. I just cannot see how a company like Nokia would want to get involved. Producing mobile phones is all about cramming as many features as possible into a trendy shell with a small bill of materials and then flogging this as cheaply as possible to the mobile phone operators like Vodafone. Locking yourself into a quirky battery company makes no sense. Licensing the technology from them just adds cost to manufacturing. This is going to be a hard sell, especially when the Nokia engineers start scratching their heads over it. Battery life is a pressing limitation on the development of mobile technology and features. Will manufacturers and their customers really accept diminished battery life in return for nebulous benefits? Exradia are betting they will. Their site videos suggest their customers will. But asking people on the street if they want to be safer is a bit like asking them if they want free beer. Reality may well be different.

My guess is that Exradia executives will spend a futile Summer camped in Sweden and Finland and, when it starts getting cold, the push into retail sales will begin. Even then, flogging magic batteries to the public is going to be hard work. It is not like the qlink people who can glue any old electronic component into a pretty resin case and make a mint. Making mobile phone batteries in itself is complex technical business without the bother of the ‘special incoherence chip’. There are hundreds of variants and the top sellers change on a quarterly basis. You are going to have to run hard to keep up and will have to flog hundreds of thousands to make the whole effort worthwhile.

Maybe, a lower key and even profitable strategy will be producing commercial and domestic ‘incoherence spreader’ boxes for the office and home. Tackle your Wi-Fi, mobile and mains all in one go. I think it will be fun watching this one.

Yes, it has been fun watching this one and I have written a follow up here: Exradia: Angels or Demons?