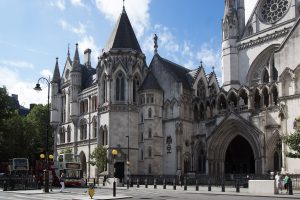 It is now three years since I had to defend myself for five days in the High Court with Melanie Byng against a series of claims that we had defamed Angel Garden and Steve Paris. We were sued over a blog post I wrote, a handful of tweets and Melanie retweeting a tweet from Maria MacLachlan. The High Court found completely in our favour and dismissed all the claims.

Defending your self in a libel trial is not easy or cheap. We had spent over a year going through the pre-trial procedures, disclosures and mediation attempts. We came close to settling a few weeks before trial, but for reasons not clear to us, Garden and Paris parted ways with their lawyers and tried to escalate the dispute by reintroducing further claims that they had abandoned after seeking legal advice a year before.

As a result of losing, the courts told the claimants that they should pay our costs. This was not cheap, and they had to sell their house to do so. I suspect their total losses were well over a quarter of a million pounds. This devastating result was as a consequence of pursuing petty issues over me not publishing a comment of theirs on this website, and for a family falling out with the Byngs after their teenage son stayed with the claimants in their house in France. The UK courts were used to try to solve life’s trifles, with the inevitable devastating consequences.

For me, it is incomprehensible that so much effort and risk was put into misconceived civil claims over such trivial issues. And that effort has not stopped over the past few years. Angel Garden and Steve Paris have tried to appeal this decision and find other ways to ‘seek justice’ in any way they could. They sought to appeal the decision in August 2015 in the Appeal Court and their application was refused ‘on paper’ (a judge looked through all their copious complaints over hundreds of pages and said ‘nope’.) Then in March 2016 they had the chance to address an appeal judge at the Courts of Appeal, and he also refused them. The judge said ,

In my judgment, these submissions reveal an underlying difficulty for the claimants.

That difficulty is that they allowed a relatively confined dispute to escalate into unpleasant exchanges. That was unfortunate enough, but for the claimants to then have embarked on an expensive libel action, acting on their own behalf in a difficult and relatively complex area of the law, can only be viewed as a mistake. Even if they had succeeded on every point, the damages awarded would have been modest, and the difficulties they now find themselves in as a result of their view of their claims are of their own making.

Paris and Garden subsequently asked for the judge to be recused as they claimed he was ‘biased’. This year they submitted two applications: the first to appeal the pre-trial decision to stop them expanding their claims against us a few weeks before trial; and the second, to reopen the appeal based on them having obtained ‘fresh evidence’.

Hundreds more pages were submitted to the courts, and, after some time, the court has now come back and categorically stated that their request would be ‘refused as totally without merit’. (The full judgement is reproduced below.)

This is as harsh a rejection as the courts can make. It brings their attempt to appeal on this basis to a halt and gives them no opportunity to present their latest arguments to a judge in a court. In addition, it states the submission of an application was made vexatiously. I suspect that, as a consequence of this, the court has now warned them that should they continue to pursue us on these matters the court will consider making a Civil Restraint Order against them. Such an order could result in very serious consequences for them.

When I first wrote about their failure in the trial, I hoped that the couple would move on from this. That has not happened. Indeed, after this final announcement has been made, their efforts are now turning to our lawyers on social media, claiming that Robert Dougans and Jonathan Price lied in court and misled judges. Amazingly, they claim the judges have lied and/or were fooled. They have been tweeting at people interacting with Doughty Street Chambers, by monitoring this account, to thrust their allegations against them. At the very least, this is not dignified. Our lawyers are honourable people who did a fantastic job at commercial risk to themselves. Their attacks on Doughty Street Chambers are appalling given the work they do to stand up for Human Rights around the world.

The trial judge made a very pertinent observation of Angel Garden,

Over time during the hearing before me the impression became irresistible that in truth the Second Claimant finds it extremely difficult to accept that others may rationally form any view different from her own; and naturally, repeatedly, and very rapidly leaps to the conclusion and settled belief that if they do, they can have done so only out of personal hostility to her.

In my view, it is this willingness to fixate on beliefs of people being hostile to her when only disagreement exists, has led them to tragic conclusions. And now, Paris and Garden want to blame myself and Melanie for ‘perjury’, for our lawyers for ‘lying’, and the police, journalists, sceptics, public figures and politicians for ignoring and dismissing their complaints.

In one of their latest blog posts, they write about ‘Fake Feminism’ and accuse Doughty Street of being hypocrites by running their #DoughtStreetWomen campaign whilst somehow doing great harm to themselves. With an irony that is lost on them, they choose to support this view by quoting the tweet of someone using the name and image of Dr Ian Paterson, perhaps Britain’s most notorious criminal, psychopathic misogynist, who also appears to be upset at these chambers.

I can only, once again, do two things: firstly, thank my lawyers for their hard work and equanimity in the face of this onslaught; and secondly, hope that Paris and Garden finally have the good sense to understand they have made terrible mistakes, misconstrued what has been said to them by the courts, accept the many judgments against them, and move and find more productive things to do with their lives.

IN THE COURT OF APPEAL, CIVIL DIVISION

ORDER made by the Rt. Hon. Lady Justice Sharp
On consideration of the appellant’s notice and accompanying documents, but without an oral hea respect of an application for permission to appeal

Decision: REFUSED AS TOTALLY WITHOUT MERIT

An order granting permission may limit the issues to be heard or be made subject to conditions.

2. A2/2017/1648 This application, brought more than two years out of time, with no reasonable explanation, is a hopeless attempt on vexatious grounds to challenge an unimpeachable case management decision made by the judge. The application before the judge was made extremely late; it would have led the vacation of the trial date, which was imminent, and as the judge found it would have vastly widened the scope of proceedings with the consequent implications for court resources and costs. Further, as the judge pointed out, to the extent the evidence was relevant to the defamation claim it could be used without amendment. The material put forward as fresh evidence does not meet the criteria for admission on any basis. The extract from without prejudice correspondence was before Simon LJ in the first application to re-open the appeal. For the reasons given by Simon LJ this is privileged material and in any event does not assist the applicants. The applicants’ video footage appears to be a different camera angle of footage disclosed at trial; it adds nothing to the merits, and was available at the time of the trial.

3. A2/2015/2839(B) The requirements of CPR 52.30 are not met. The fresh evidence includes the video footage already referred to, and is not admissible as such for the reasons already given. The judgment in Monroe v Hopkins [2017] EWHC 433 (QB) is not evidence, fresh or otherwise: it is a decision of the court of no relevance to these proceedings. The allegations of actual and perceived bias against Simon LJ and therefore the assertion that he should have recused himself are misconceived. The fact that Simon U determined the first application for permission to appeal on 22 March 2016 was no bar to his determining subsequent applications, including the one that apparently provoked the allegations of bias, namely that the Respondents be given opportunity to reply to the Applicants’ submissions in the first application to re-open the appeal: see Otkritie International Investment Management Ltd v Urumov [2014] EWCA Civ 1315.

4. The applicants should understand that if any further such applications are made directly or tangentially in connection with these proceedings, and the issues considered in them, the court will be bound to consider making a Civil Restraint Order against them pursuant to CPR Practice Direction 3C.