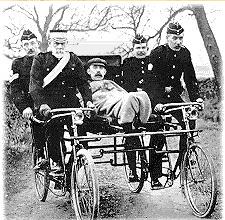 Iatrogenesis is not a concept that is confined to quackery, but like most of the words in my Quack Words series it tends to show up more often than not on quack web sites and so can be a good quackometer word.

Iatrogenic illness covers the concept of harm having been done by the healer. Harm could come from many quarters including mistakes in diagnosis or treatment, professional negligence, adverse reactions to drugs, infections acquired during surgery or in the ward, and mis-presciption. Undoubtedly, all these things happen and quite regularly too. But, the charge by quacks, when discussing iatrogenic illness on their web sites, is that medical greed and their ‘addictions’ to using toxic drugs kill hundreds of thousands of people unnecessarily. The conspiracy of ‘Big Pharma’ wants to keep us ill and sell us more toxic and harmful drugs.

Often figures are presented that are used to show that iatrogenic death is the third or fourth leading cause of death in the western world. A typical example is given here where figures for adverse drug reactions cause 106,000 deaths per year in the USA.

On this basis, doctors look like mass murderers. Their pursuit of profit and the monopoly of health care is causing genocidal-scale evil. By contrast, alternative medicine is presented as risk-free, gentle, holistic and free from commercial influences.

On the face of it, the charge is very serious. Is it that simple?

In short, the sort of analysis used by quacks to present real medicine as a terrible killer is completely devoid of the medical context of the supposed deaths and concentrate only on negative outcomes and ignore positive outcomes of treatment. These figures are unbalanced and deliberately misleading.

For example, looking at the first reference given in the link above (Lazarou et al), it is worth noting that the authors point out that the major cause of problems was due to known highly toxic treatments, such as warfarin. These sorts of drugs are given to people who are seriously ill and at risk of dying. If a small percentage experience an adverse drug reaction then that has to be balanced against the overall benefits of lives saved by the treatment. In considering seriously ill patients who would inevitably die without intervention one should be able to take risks with known drugs in order to save a high number of them. Deaths in this case are a special sort of failure – not a case of negligence or malpractice – but a part of the risks of doing real grown-up medicine. Hospitals have to deal with seriously ill people and sometimes have to be quite aggressive in their treatments. The alternative is certain death. Most quacks are spared this confrontation with reality as they treat their headaches and skin complaints.

Undoubtedly, the side effects could be reduced by better understanding of the drug and that is exactly why medical research is done, with trails and experiments. For anti-rational alternative medicine quacks to use such data as a way of highlighting the ‘evils’ of real medicine is an act of propaganda and scaremongering. It is shameful denigration of a profession that has to daily make life or death decisions with the most complex system in the known universe – the human body.

If you are not convinced, an analogy: ambulances are responsible for many accidents, injuries and deaths every year. They charge at high speed through populated areas, ignoring road conventions and distracting other drivers. If you were to publish a table of injuries and deaths due to ambulances, they would look quite starting. In fact, one source reports an average of one collision each day involving an ambulance in the UK. Not all result in death of course, but still a big number.

Would you ban ambulances and set up alternative, low pollution, holistic and carbon neutral cart and horse emergency transport? How about bicycle ambulances? Of course not. There is no such thing as alternative and complementary ambulances. Even quacks get in the ambulance after a bad road accident. The reason is that by taking appropriate risks, ambulances save thousands of lives every year. Seconds counts when hearts and lungs are failing or you are bleeding badly. The lives saved vastly outweigh the iatrogenic injuries caused. It is up to society to balance the benefit and risks and choose how ambulances should behave.

The same goes with medicine. The culture of informed consent requires doctors to discuss the risks and benefits of any treatment. Patients, doctors and society all have a role to play in deciding if the risks for a particular treatment outweigh the benefits. This is an open process. Mistakes are reported and outcomes monitored. The fact that quacks can find the statistics show this to be true.

But what about alternative medicine? Do quacks consider that they may too cause iatrogenic illnesses? Homeopathy is a classic example. The mantra is that their pills are completely side effect free and homeopathy is gentle and safe. At one level, I would agree. Sugar pills with no active content ought to be pretty safe for the same reason that they are also completely ineffective against anything. But manufacturing processes can go wrong. Some very nasty substances are used in some preparations including viruses, poisons and mobile phone radiation(!). Getting it wrong could risk the patient. Do homeopaths know that they get it right? What tests have been done?

One Italian study claims to have looked at this. “Harm in homeopathy: Aggravations, adverse drug events or medication errors?” reports that.

Out of 335 homeopathic consecutive follow-up visits between 1 June 2003 and 30 June 2004, nine adverse reactions were reported (2.68%) including one case of allergy to lactose, excipient of the granules.

You have to laugh, don’t you?

Seriously, I would take this report with a pinch of salt, much as I would take any study of homeopathy by homeopaths with deep scepticism. What worries me far more is that homeopathic iatrogenesis is going to come from the skewed and twisted propaganda they dish out about the evils of real medicine and the power of their own ‘gentle art’. Its the thinking that leads homeopaths, like the SHEAF charity, to go out to Kenya to set up homeopathic malaria clinics that scares me to death and undoubtedly ends in iatrogenic deaths of the most negligent and deluded kind.