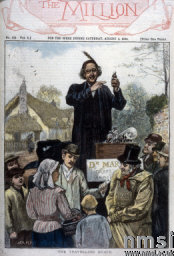 Once upon a time, back in the olden days, that is, before 1996 or thereabouts, your typical quack was faced with a big problem. Just as with producing software, the manufacturing stage of the quack business is straightforward. The software firm used to ‘record’ software onto ‘floppy disks’ and the quack could press ‘nutrient pills’ in huge numbers, or fill bottles or make pills with ‘homeopathic water’ straight from the tap. All at low cost and only requiring a few people.

Then came the hard part – getting your message out and distributing your product. The pre-1996 quack was forced to travel the length and breadth of the country, with their wares in a wagon, stand on a soapbox and yell at any crowd that would listen. Either that, or set up shops like ‘Holland and Barret’. The problem here is that the business does not scale easily. If you want to sell more and make more money, then you have to set up your soapbox in more places but there are only so many hours in a day, or find other sellers just as charismatic as you, but with no desire to rip you off. If you want to build shops then you need someone to lend you money – and you are a quack, after all. Software and quackery in the times of yesteryear had the same problem: production easy – marketing and sales hard.

The Intraweb changed all of that. Suddenly, even the tiniest software house, such as the nascent Google, could get its message out cheaply and distribute its product for nothing. Rapidly scaling a business was possible in ways never before conceived. Google went from nothing to a multi-billion dollar business in the blink of an eye.

Now, Google has done more than promote its own business on the web – it has promoted everyone else’s business too, indiscriminately. And so the quack has a new channel to market other than a tee-pee in Glastonbury’s Healing Fields or a bit of shabby shelf space next to the cardboard-flavoured vegan scotch eggs in the Health Food Shop. Suddenly, quackery can become a multi-million pound business – and all run from your purple-wallpapered bedroom.

And before I criticise Google, I just want to say that the Quackometer would not be possible without their wonderful technologies. To be able to search vast stores of knowledge, aggregate disparate data-sources and allow millions access to the most obscure writing, and all in under a second, is truly a miracle. The Quackmeter uses Google to see if someone might be a quack, allow filtered searches of the web to be done, and provide quick access from any web page to the quackometer.

And nor am I going to criticise Google for allowing anyone to find out about homeopathy, blood letting and leaches if that is what they want. Free speech and access to information are the protection of our liberties. However, the keen-eyed among you will notice that my feeble attempts to earn money from this site, from clicks on the Google adds that appear, is a total failure. The only adverts that appear are for quacks selling stuff. My gentle blog readers and kind quackometer users are far too intelligent to fall for the scams of pill pushers and Reiki healers. So the adverts must go, under the forthcoming site revamp. To keep them here would only allow opportunities for click-fraud.

But, on further delving, I wonder if those ads should ever have appeared at all? Google is quite clear on this matter in its terms and conditions for advertising. As part of its ‘Do No Evil’ mantra, as well as not allowing adverts for racist organisations, guns and ammunition, prostitution and hacking tips, Google makes it quite clear that Miracle Cures are banned.

Now, call me cynical, but healing anything by channeling ‘cosmic Reiki energy’ would be miraculous if it worked, treating any disease with plain water, as the homeopathist would have it, would be a marvel and a wonderment. But all these things appear on my pages as adverts. So, naturally, I email Google and ask them how they police this and what can be done about it.

The response I got back was as follows:

We’ve received your feedback and will make sure to share your observations with the appropriate people here at Google. In order to maintain a high quality of service for our advertisers, we are always interested in making improvements to the program. We appreciate hearing feedback from our advertisers and encourage you to continue letting us know how we can improve the Google AdWords experience.

Google believes strongly in freedom of expression and therefore offers broad access to content across the web without censoring search results. At the same time, Google may refuse any ads or terminate any ad campaign at any time, for any reason, as noted in our program Terms and Conditions.

Google AdWords reserves the right to refuse to run certain ads or categories of ads on a case-by-case basis. Please note that the decisions we make concerning advertising in no way affect the search results we deliver.

…which isn’t too helpful. That was a month ago. Whoever the email was passed onto was more concerned with hunting for nudist beaches on Google Earth, or scanning in books in order to violate copyright, than answering my problem. This is obviously a cut-and-paste job and looks like is part of the normal fend-off when people complain about search results they get offended by. But all I am asking them is how they uphold, if they do, their own code of practice.

I wasn’t expecting much. But somehow searching for ‘ammo for sale‘ manages to produce no adverts. Why is it so difficult to do the same for ‘homeopathic cancer cure‘? That search produces all sorts of quacky fraudulent miracle peddlers in blatant contravention of Google’s own policy.

Maybe the difference is, that despite what some would have us believe, guns really do kill people and often quickly, efficiently and in large, localised numbers, as we have been so horribly reminded by today’s news from Virginia Tech. Quackery kills in slower, less noticable and more distributed ways. Giving false hopes, distorted views of medicine, and fraudulent cures can kill, prolongs unneccesary suffering and removes money from those who may need it. It isn’t going to make the headlines and there is tacit acceptance amongst many of much of this ‘personal choice’.

Somehow, I will just have to keep pressing away at this. I have no figures, but I would bet that Google has allowed a massive rise in small quackery businesses and contributed to their success. AdWords cost less than soapboxes and reaches more people. Surely, that is an evil that Google need not do?

3 Comments on Google ‘Sees no Evil’