A big thanks to quackometer correspondent, a broadcaster, journalist and nutritional therapist, Suzi Grant for bringing me to the attention of the wonderful sounding healing technique of Phytobiophysics®. (please don’t sue me…) This is a technique that is being promoted by the Institute of Phytobiophysics which follows the Mossop Philosophy through its products and courses. The Mossop philosophy is supposed to:

harnesses the vibration energy of plants to release energy blocks in the human body so that balance is re-established for all levels of consciousness; spiritual, emotional, mental and physical.

So far, just the usual pseudoscience, sounding a bit like a Bach Remedy. However, the Mossop Philosophy is based on the ‘discoveries’ of Professor Dame Diana Mossop. Wow. Regular quackometer followers will now just how much flaunted titles excite the little black duck. A Professor and a Dame! That has to be worth a little dig.

So before we inquire a little deeper, just what are the claims of Prof. Dame Mossop and the science of Phytobiophysics?

The Professor apparently suffered from malaria and did not respond well to real medicine as it was at the time. During some convalescence in the Far East and some ‘organic nutrition’, the Dame became convinced that illness was caused by ‘unhappiness’ and that plants provided the ‘vibrations’ to cure us. Much ‘research’ followed before Diana was able to bring forth her extensive range of healing flower products to the world.

The Dame now runs a web site selling flower essences, a bit like Bach Remedies, but somewhere (its a bit confusing) vodka is used rather than brandy and the flower vibrations are ‘amplified’ and not ‘diluted, as in homeopathy’. One has to wonder just how much vodka is not reaching the manufacturing stage.

Now, flowers are nice, and I might not mind too much, but PDDM (I can’t be bothered to type her full name all the time), claims that her pills (manufactured by a homeopathy factory, apparently) are much stronger than homeopathic pills (not hard) and bach remedies (for brandy lovers only) and can cure viral diseases. Oooh. Scary. Viral infections can be lethal and need proper medical care. We are are now getting into danger territory – the sort of territory that gives rise to HIV deniers and the bonkers thinking of some unfortunately misguided African politicians that will undoubtedly end in the deaths of millions of people unless some very clear thought is applied. Whilst I see nowhere on PDDM’s web site to suggest that she is in this genocidal thought camp, claims for viral cures really do need to be backed up with sound evidence. The stakes are high. Who knows who will misuse this technique.

Anyway, the web site and her biography leave many questions unanswered. But for my correspondent, Suzi Grant, Prof Dame Mossop is someone I “might like to talk to … before deciding it is also ‘quackery'”. Suzi is a journalist and so I would like to apply some journalistic techniques here. Basically, checking my facts, not taking anyone’s word for it, and asking the obvious questions.

So, here are the questions I would like to ask the Professor Dame…

I could go on. But the depth of ridiculousness is far too much for one blog. Next time perhaps…

I will end on an odd observation. Diana Mossop (I shall drop the titles for now until I get my answers) claims to have helped supermodel Jodie Kidd through a bit of a crisis. Great. Good Stuff. But didn’t my last suspect Professor, the Distinguished Provost of the Royal College of Alternative Medicine, Professor Joseph Chikelue Obi also have thing about supermodels, only this time Kate Moss?

What is it with supermodels? I must investigate… 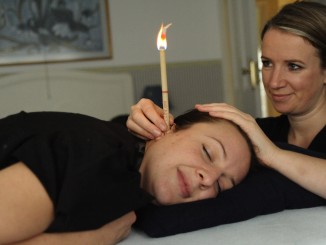 Hopi Ear Candling – Removing the Grey Goo Between Your Ears