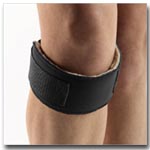 Go on, you deserve it. Slap yourself with a Healing Broom