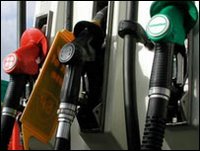 I’m going to stick my neck out here. I could be horribly wrong. But that is science; come up with a hypothesis, see if it fits with evidence from the real world. If so, create a powerful explanatory theory, if not, then shut the hell up.

This contaminated petrol thing. For non-UK readers, thousands of motorists have been reporting their cars breaking down due to dodgy fuel. What has this got to do with quackery? Well, I would like to suggest that the thinking that leads to a belief in quackery is behind this.

Specifically, what I propose that the cause of this countrywide crisis is – nothing. That’s it. Nothing happened. There is no story. There is no contaminated fuel. It is a mass delusion.

But there are reports of contaminated fuel being found, tens of thousands of angry motorists, a complete shortage of critical oxygen sensors broken by the dodgy fuel. Surely everyone cannot be wrong?

So, let’s start with a back of the envelope calculation. In the past ten years, I can remember one occasion when I have had a spluttery engine and a dodgy fuel line. I think it was dirty fuel and it was quite difficult to diagnose and fix. If this is typical, say one problem like this every ten years, then how many motorists per day will have similar engine problems? Let’s be generous, and remember this is a rough calculation, let’s say my experience is typical of one problem every ten to fifteen years, then I can expect one problem every 5000 motoring days (or so.) With 50-60 million people in the UK and roughly a car per person (maybe a bit less), then we can expect about 50 million divided by 5000 problems per day – that works out at about 10,000 fuel issues per day. These could be the result of dirt in the lines, broken electronics or a drunken kid peeing in your tank. Doesn’t matter. When the car starts spluttering, you have no idea what caused it – it could be anything. You place your faith in the mechanic to diagnose and correct it.

Feel free to insert your own numbers here. As I say, this is finger-in-the-air-stuff. Where does this leave us? Well the next thing I want to propose is this: the critical part that ran out of stock was some sort of oxygen sensor. Now, anyone who has had to get a spare part on a high end car knows that garages have to order off for them. The actual UK stock of a part that rarely fails may be just a hand-full, a dozen or so at most. Every day a random different amount will be ordered. Maybe one day, a random fluctuation means that quite a few more than normal are required. Suddenly we have a shortage and someone will be wondering if there is a reason for this!

Next, the AA or RAC get informed and before you know it, someone at the media. The media asks for people to report if they too are having problems due to suspect contaminated fuel and that vast pool of ten thousand people with fuel problems that day put two-and-two together. Mechanics get pressurised to replace oxygen sensors – just to be on the safe side. Maybe a few unscrupulous ones say they need replacing when they have no evidence that this is the problem.

The flood-gates open. The media goes berserk. The news at 9 o’clock on BBC are reporting a national crisis. More and more people report their symptoms.

And remember, nothing has actually happened.

So what evidence supports this chain of events. Firstly, the patterns of reported problems appears to be uniform across the country, or more specifically, the higher the population density, the higher the reports. If there really was contamination, then you would expect reports to be highly localised? Secondly, reports come from petrol and diesel users. Reports of symptoms are not consistent with some driver even blaming their flat batteries on the problem. Funnily enough, some are predicting class action law suits involving 10,000 people. Exactly as I might predict.

But what of the contradictory evidence? Well, contaminated fuel has been found with an excess of silicone (or silicon, depending on the report). Does that sway me? Well, I do not abandon my hypothesis just yet. It is well known phenomenon that when you go looking for problems, you find them. Compare this with Chernobyl where thousands of health problems were found after the explosion at the nuclear plant. Years later, the UN report that the vast majority of these problems already existed in the Ukraine. The doctors sent in were surveying a poor, ignored, rural population with poor access to health services under the soviets . No wonder the problems found were huge. And so there is no clear link so far that this batch of faulty fuel can explain all the problems reported. It could have nothing to do with it. As with all science, we should wait for repeat tests and independent confirmation before jumping to conclusions.

So what has this to do with quackery? Well the same dodgy thinking that leads to people believing that homeopathy works could explain the fuel crisis. People need explanations in their life. They also need to feel some control over their lives. Cars these days are like our bodies. Largely unfathomable. There is nothing to do under the bonnet but fill the windscreen washer bottle. Your car breaks down and a man in a white coat with a laptop is required to diagnose the problem before a new ‘black box’ is ordered to correct the fault. Modern medicine also means that the illnesses we suffer from require complex interventions from doctors who do things that we barely understand.

The contaminated fuel was an easy explanation for people whose cars broke down that day, just as ‘misaligned chakras’ is an easily explanation when you are feeling run down. People were sure that it was contaminated fuel when they had no real reason to hold that belief just as people believe that their reiki session ‘works’ when their pain may be getting better anyway. Underpeforming children can get better grades by taking Omega 3 pills. AIDS patients in poor countries just need vitamin C tablets.

Car Quackery does look as if it is quite rife. Just as people buy vitamin supplements from the Holfords of this world in order to achieve ‘optimum health’, so people buy fuel supplements from shops like Halfords in order to achieve ‘optimum efficiency’. Magnets to wrap around your fuel pipes, detoxing liquids to add to your fuel – all the quackery is here! How do these people know their fuel efficiency is 5% better? Are they not subject to the same biases, delusions and wishful thinking that the person who takes homeopathy is prone too? Are they just driving with a lighter foot after becomeing more self-conscious of their fuel usage? Sounds like the need for a blinded trial to me.

As I said, I may be wrong. But I hope you would agree that a huge percentage of those who think they have had contaminated fuel problems may well have fooled themselves. Read the anecdotes of people sent in to various newspapers and news-sites. Look how heartfelt and genuine they feel. Just like any testimony on a quack’s web page.

5 Comments on Holfords and Halfords