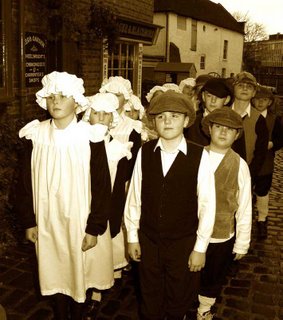 Right. Skeptic Class. Stop what you are doing. Silence. Stop Talking. iPods out of your ears. Orac – no more insolence from you. Are you chewing? You are all here in detention class because I have been hearing very bad things about all of you. You have all brought shame on the Skeptics’ Circle. Now swallow your fish oil pills and listen.

Your essays you have just handed in the the last two weeks are a sorry lot. Some of you have been doing some good work, but the bad behaviour of some of you means you are all in trouble.

OK. Who wants to start? Let’s hear your essays.

Bronze Dog. Your doggerel essay on the woo use of the ‘Unexplainable’ was alright, perhaps not your best, but perhaps you would like to explain to me why you were late handing it in? Is that unexplainable? Some paranormal incident perhaps? Left it on the psychic bus? Got eaten by a ghost dog? Next time, stick in a envelope and address it back to a time when I cared.

Next. Orac. Your essay was on ‘why we shouldn’t debate with woos’. You know too well that your class mate Steve N is this very evening next door in the woo class talking about homeopathy. At least he is being nice to them by talking to them. Some of the others here just want to make them cry – and we shall be hearing more of this later. What do you mean they don’t listen to you? Did they ask for your opinion? And anyway, Steve is doing much better at school than you. He will probably grow up to be a brain surgeon or something.

Mr Mendel. Your media studies essay on why newspapers only print ‘miracle cure’ stories and not ‘negative findings’ made a refreshing change from your usual obsession with the school canteen and the new chef, Patrick ‘the prof’ Holford.

Erin – your essay on ‘Carbon Dioxide is Life! ‘ was too short. But quite funny. Are you sure you have not been had? See me.

Back to Steve Novella. He had to hand his essay in early as he is on a school assignment with the homeopaths tonight. But don’t think I haven’t forgotten about him. He will get his comeuppance when he gets back. But he has written some interesting things on ‘the psychological motivations that drive belief in chi and other magical nonsense’. I hope he is not using those words in front of the homeopaths tonight. They will start crying again. I’ll have the parents in here complaining.

Martin Rundkvist. Stop digging around in the bottom of your desk. You have no idea what you will find there. And just what is this thing you have posted on psychic archaeology? And your art work looks live a 5 year old drew it. You did not even colour it in. What was that? It’s psychic artwork? And for the last time. No weapons in class. Not even swords. I don’t know what you allow in Sweden. But it won’t do here.

Zoo Knudsen. What is all this nonsense about an image of Charles Darwin being found on a cheese danish? You are not making fun of the girls and boys in the religious education class are you? You know how sensitive they are.

Interverbal – some sensible explanations of trial design. I wish the rest of you would occasionally step back and explain the basics. Its good for the whole class. WhiteCoatUnderground – you too, with a good example about Gary Null. You can go home now.

And Eric Michael Johnson, your Primate Diary on the religious rights hypocritical condemnation of our old teacher J ‘the helix’ Watson made some interesting points. Blake Stacey – are you trying to be clever talking about Einstein’s equations? If some in film class wants to make a school documentary on how E=mc3 then who are you to challenge him? Do you believe everything Professor Einstein tells you? What do you mean, ‘evidence’?

Sit back down you lot. That was the bell. It is a signal for me, not for you.

Factician – you are treading on thin ice by criticising the parents of this school. If they are worried about installing WiFi in the school, or measles jabs, or making sure you are taking your fish pills then you have to understand they are doing it for you – the children. Who can argue with them? Don’t you care?

And as for you Mark Hoofnagle, don’t deny it, but aren’t you picking on someone else in skeptics class? It is no good just handing in another essay on Uri Geller. Don’t think I haven’t noticed.

Rebecca. Rebecca. Rebecca. Do you think watching telly and then telling us about it is homework? It wasn’t even something educational, like the BBC or Discovery. It was the Psychic Channel. And making fun of the people on the telly is not nice. They really believe in ghosts and who are you to say otherwise?

And now the new boy in the class, Dikkii. You have written about something we are all sick to death of hearing about now – homeopathy. But, I must commend you. Gold Star. At least you took the trouble to use your own words. Keep it up. We want to hear more from you.

Which brings me on to the rest of you sorry lot. How many times do I have to tell you that copying your essays from Google is not acceptable? Its downright plagiarism. And this week we have seen an awful lot of you doing it. About a hundred. Not just from skeptics class, but the politics class too. You should all know better.

It all started with a very naught boy who wrote a story about some homeopaths in Africa who had some magic beans to help cure the poor Africans of malaria and AIDS. I think he also pulled the pig tails of the ginger girl in the class. This story really upset the girls and boys in woo class and they began to cry and ran home to their parents.

So, I have had the school governors demanding I suspend this pupil and destroy the essay. I have never seen them so angry! And what happened. You little lot copied it all over the place. Plain childish.

It started with Head Boy ‘the prof’ Colquhoun who has written his own story about it. We expected better of you, David. Then Ben wrote about it in the school paper. The rest of you just blatantly copied. Randi! Put the spoons down – we have warned you about destroying school property. Even you did it! Its unheard of. At least you added your own criticisms.

So, I am going to read out the register of bad boys and girls. Fingers on lips.

(more to be added when I find the culprits)

So, don’t do this again. It is only your own time you are wasting.

Skeptics’ Circle #73 is at the rather obsessively excellent HolfordWatch.

7 Comments on Skeptics’ Circle #72: You Very Naughty Girls and Boys.