Yes, like it or not, now is the time to start thinking about the perfect gift for the geek in your life. Last year we were treated to a slew of great books about quackery, many of them now available in paperback.  Nonetheless, there are still many great new books, not all just about alternative medicine, and I would love to tell you about a few of them here. 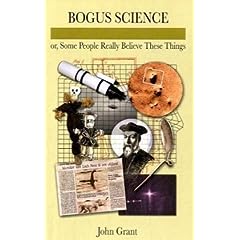 John Grant has written a trio of great books cataloguing various forms of pathological science. The final part of his trilogy was published a few weeks ago: Bogus Science

(or, Some People Really Believe These Things) wades through dozens of bizarre ideas that masquerade as science but could not be more divorced from reality. The book kicks of with a history of flat earthers and how such beliefs have persisted though the centuries despite ample and obvious evidence to the contrary.

We are treated to the fascinating story of how Alfred Russel Wallace, co-discoverer of evolutionary theory with Darwin, got himself into a nasty tangle with a flat earth fanatic, John Hampden. A public wager of £500 was set by Hampden that challenged anyone to prove the Earth was not flat by showing that a 10km stretch of canal in Cambridgeshire exhibited a curvature. Wallace, being broke at the time, decided to take the candy off the baby. With referees appointed, Wallace placed stakes along the length of the canal with markers placed at identical heights. By looking through a telescope, it should be possible to see the differences in height. After a frustrating start, Wallace was indeed able to show a pole in the centre of the stretch appeared to be higher than poles at each end. Despite the conclusive demonstration, Hampden’s referee, another staunch flat earther, refused to accept this as evidence, blaming the telescope cross-hairs and distorted optics.

What appeared to have been an easy way of getting Wallace out of financial difficulty with a swift  £500 (a lot of money then) began to turn into a complete nightmare. Hampden took Wallace to court and the judge ruled that since wagers on the flatness of the earth held no place in law, then Hampden could have his money back. It then got worse. A campaign of hate was started against Wallace with death threats, libellous letters and circulars aimed at his friends and neighbours. Despite being sent to jail and losing libel cases, Wallace was unable to recover his losses owing to Hampden declaring himself a bankrupt.

The book is full of the idiocies and obsessivenesses of people who believe in the irrational, from Atlantis to faked moon landing, aliens building pyramids, antigravity devices, werewolves, yetis and quantum nonsense. There are, of course, many themes in common: unquestioning self belief, the allure of the mysterious, special knowledge and a refusal to engage with evidence – the themes we see so often in the world of quackery.

But Bogus Science does not cover the whacky world of alternative medicine. For that, we must go to John Grant’s first book in the trilogy: Discarded Science

(Ideas that seemed good at the time.) The last chapter gives us a walk through the discarded ideas of medicine, including both the great bogus sciences of chiropractic, acupuncture and homeopathy, but also the lesser known ideas of thanatology, iatrochemistry and focal sepsis.

Most of the book though covers defunct science – stuff that might have been right, but has been superceded, to the more obsessional theories where individual researchers cling to ideas that others cannot replicate, such as the idea that Mars has canals, or the infamous French obsession with N-rays.

To complete the series, you will also have to buy Corrupted Science

(Fraud, ideology and politics in science). This is perhaps the most disturbing book where we find science undermined by ideology, fraud and hoaxes. Here we find religious creationists, military and political ambition, and even just plain deception by scientists unwilling to abandon cherished hypotheses.

Together, these three books make a very comprehensive survey of the world of pseudoscience. The only areas missing, by the authors own admission, are the paranormal and psychic sciences but fortunately Grant hints that a Spooky Science might be on the way.

One of my favourite books of the year, tackles in depth an area covered by Grant – that of cryptozoology. Chris Lavers, wonderful book, The Natural History of Unicorns

, looks at the evolving belief in these strange beast over the centuries. Various candidate animals are explored as the source if the myth, from rhinoceroses and narwhals to various species of antelope, cattle and donkey.

The book contains the fascinating story of how the medieval allegorical iconography of the virgin and the unicorn came about. It is well known now how our current ideas of how Mary was a virgin may have been a mistranslation. It is also likely that references in the Bible to unicorns may have come about from Ptolemaic scholars In Egypt  translating the Hebrew scriptures into Greek. When they encountered the horned animal called a reem, they had little idea what this middle Eastern creature was. Unable to come up with a candidate they placed the monoceros there as the closest they could come up with. Translated into Latin, the monoceros became the unicornus. Much more recent attempts to translate the Greek have decided that a reem was probably a wild ox or even an auroch.

Behind many of the myths of the unicorn is a common thread of the medicinal properties of the horn of the beast. A thriving trade existed in Europe with many different species being passed off as a unicorn. The horn could detect poison and so protect its owner from harm. We see that the bones and horns of goats, horses and whales were used to create Unicorn horn. Unfortunately, Lavers concludes that the source of the horn was unfortunately an ape’s runaway brain. But for so long, so common was this trade in medicinal horn that belief in unicorns persisted well into the 19th Century where explorers in Tibet were always told that the beast lived in the next valley on. The constant search into the ‘next valley’ continued well beyond the time when it should have been obvious that no such creature existed.

We see the same story on these pages as homeopaths perpetuate the quest for the source of their magic water. The conclusive experiment is always just one trial away.

One book that is compulsory reading over the coming month is the wonderful Ariane Sherine’s compilation of sceptical writing about Christmas. Far from being a soulless and joyless book, it is a real treat of personal thoughts and experiences of what Christmas now means in a largely secular and almost atheist Britain. Wonderful stuff. Ariane is speaking in a week or so at Oxford Sceptics in the Pub. Can’t wait. Proceeds from the sale of this book go to UK HIV charity Terrence Higgins Trust.

All these books (and more) are available by clicking on the images, or going to the quackometer bookstore. A few pence will go to me if you buy one and keep me in mince pies over the festive season.

Trick or Treatment: The Event

2 Comments on Bogus Science and Other Christmas Gifts