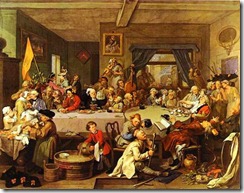 We have a conflicted relationship with the things that give us pleasure. We fear overindulgence may be harming us, and we desperately seek evidence that suggests our habits are beneficial, so that we can continue to enjoy them without guilt. This year appears to have been a good year for coffee in this contradictory quest.

Over the past twelve months, the People’s Medical Journal, the Daily Mail, has given us the following stories about coffee:

So, on balance, it looks as if his year coffee will have been doing us good as long as we are not trying for a baby, wanting to avoid wrecking our brain, reducing damage our baby’s DNA or not wanting to hallucinate wildly.

My nearest big town, Oxford, boasts a little coffee shop that dates back to 1650. It was one of the first places to brew coffee in the UK and is still going strong. Before long, Oxford saw coffee houses as centres of public scientific discussion and debate, with Robert Boyle taking part in the Oxford Chemical Club, which met in a coffee house, and would later become the Royal Society. (We now hold our Skeptics in the Pub, a little further up the High Street.)

It would look like concerns from coffee drinking did not first come from the problems of direct consumption but from the threat caused by radical thought and discussion taking place in the newly emerging coffee houses. The Vice-Chancellor of Oxford soon had to ban the perusal of pamphlets in the coffee houses that were critical of the University and the State. King Charles II tried to shut down the Oxford coffee shops for fear of fermenting rebellion – but the outcry was so huge, the order was soon rescinded.

By the beginning of the nineteenth century, coffee was a ubiquitous drink. And health fears were sure to follow.

Enter Samuel Hahnemann, founder of the doctrines of homeopathy. Before Hahnemann had fully formed his ideas about shaken and diluted water as a panacea, he had quite different and conflicting views about what caused illness and what could cure it.

In 1803, he published an essay entitled, On the Effects of Coffee. This essay gives fascinating insights into the beliefs of the inventor of homeopathy and how they must have changed. He starts out by explaining that

In order to enjoy a healthy and long life, man requires foods which contain nutritious, but no irritating, medicinal parts.

Hahnemann sees a clear distinction between medicine and food. However, he worries that many foods are more medicinal in their nature than nutritious,

Medicinal things are substances that do not nourish, but alter the healthy condition of the body.

Coffee is a purely medicinal substance.

We are told that the only foods that are are free from all medicinal properties are spring water and milk. All foods appear to have some degree of medicinal quality and so should be eaten with caution. If we want to flavour our food “the only substances that have been found to be harmless and suitable for the human body are kitchen salt, sugar and vinegar.”

All other accessaries, which we term spices, and all spirituous and fermented liquors, bear a greater or less resemblance to medicines in their nature. The nearer they resemble medicines, the more frequently and the more copiously they are taken into our bodies, the more objectionable are they, the more prejudicial to health and long life.

Hahnemann, in choosing his diet, is then left with a bit of a quandary, as he believes that medicines should only be used on the sick,

Used by themselves, and when no disease is present, they are absolutely hurtful tilings for health and normal life. Their frequent use as articles of diet deranges the harmonious concordance of our organs, undermines health and shortens life. A wholesome medicine for a healthy individual is a contradiction of terms.

All medicines have, in strong doses, a noxious action on the sensations of the healthy individual.

At this point in time, it would appear that Hahnemann believed that a medicine’s effect is positively associated with its dose. His later homeopathic ideas would, illogically, reverse this point – a matter that has subjected homeopathy to continuous derision since its inception.

Hahnemann’s dislike of coffee appears to stem from what he believes is its unnatural bitter taste,

However, Hahnemann did understand the benefits of coffee. Indeed, it is almost as if he knew me personally, and my general demeanour in the morning,

In the first moments or quarters of an hour after awaking, particularly when this takes place earlier than usual, every one who is not living completely in a state of rude nature, has a disagreeable feeling of not thoroughly awakened consciousness, of confusion, of laziness, and want of pliancy in the limbs ; it is difficult to move quickly, reflection is a labour.

But, see, coffee removes this natural disagreeable sensation, this discomfort of the mind and body, almost instantaneously; we suddenly become completely alive.

He also recognised the benefits of a post-prandial coffee. If you have overindulged during a meal, a coffee can put things right.

Coffee puts a sudden stop to this lassitude of mind and body, and removes the disagreeable sensation in the abdomen after a meal. The more refined gourmands drink it immediately after dinner—and they obtain this unnatural effect in a high degree. They become gay, and feel as light as though they had taken little or nothing into their stomach.

And, as an aphrodisiac,

Even the sexual desire, which in our age has been exalted into the chief of all pleasures, is excited by the primary action of coffee more than by any other artificial means. As quick as lightning there arise voluptuous images in the mind from very moderate exciting cause, and the excitation of the genitals to complete ecstacy become the work of a few seconds; the ejaculation of the semen is almost irrestrainable.

I wonder where Samuel Hahnemann got his coffee from? Maybe Mr Gold Blend turned out to be a bit of a disappointment after all.

So what is the problem, you might think? Well all of this Muslim roasted bean infusion imbibing is rather unnatural. And if you obtained some benefits from the coffee, then the payback was going to be worse than the gains,

When the first transient effect of coffee has departed after a few hours, there follows gradually the opposite state, the secondary action. The more striking the former was, so much the more observable and disagreeable is the latter.

The comedown from your caffeinated high caused all sorts of problems. Peter Morrell lists all the Hahnemannian problems associated with coffee drinking,

Indeed, Morrell suggests that “Hahnemann was tempted in 1803 to ascribe to Coffee a grand theory of chronic disease remarkably similar to that which he later, in 1827, ascribed to the Itch animal of Scabies”

In developing his theories of illness and homeopathy, Hahnemann came to realise that it was a mistake to ascribe all these bad effects to coffee. In his essay, Chronic Diseases, he says,

That the drinking of warm coffee and Chinese tea…has further augmented the tendency of this period to a multitude of chronic diseases and thus aided psora, I least of all can doubt, as I have made prominent, perhaps too prominent, the part which coffee takes with respect to the bodily and mental sufferings of humanity, in my little work on the ‘Effects of Coffee’. This perhaps undue prominence given was owing to the fact that I had not then as yet discovered the chief source of chronic disease in Psora.

The strange sounding psora became the new Cause of All Illness for his homeopathic theories. And no doubt, the comments section of an early 19th Century online edition of the Daily Mail would have been full of curses to ‘scientists’ not being able to make their mind up about anything.

Morrell, the historian of homeopathy, criticises Hahnemann for using selective evidence to come up with his coffee theories and jumping too quickly to extrapolated conclusions about his observations.

Being convinced in his mind of the certainty of the theory apparently impelled him to then find ‘evidence’ for it, no matter how ridiculous. That was my main point. Further, one might say, he showed a peculiar and recurrent tendency to create ‘grand theories’ upon what is arguably scant evidence.

It was a tendency and a mistake that Hahnemann was destined to repeat when he observed that the bark of Peruvian tree could cure malaria – from which he developed his new ‘grand theory’ of homeopathy,  like-cures-like. His life was then a continual search for any evidence, no matter how slight, to back up his over-reaching scheme. This being a grand tradition that homeopaths continue to this day.

And, I guess, this is what we see in these contradictory Daily Mail stories too. We feel guilty about the obvious pleasures of a coffee and intuitively believe that this must be doing us harm, but we also easily latch onto any evidence that suggests that we are right to continue with our habit. The newspaper columnists provide us with over interpreted views of small studies that have been extrapolated into possible dramatic interventions we can make in our lives to ensure we are free from disease. The stories miss all the subtleties, uncertainties and nuances that make definite recommendations impossible and so the reader is left with a confused impression of contradictory ideas about an every day, and almost certainly relatively harmless, little pleasure.

And it is, of course, the scientists who are blamed for this fog of nutritional confusion.

3 Comments on To Coffee! The cause of, and solution to, all of life’s problems.