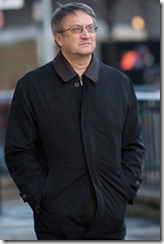 There are quite a few libel cases underway at present where large financial vested interests are using the insidious English libel laws to attempt to silence scientists and journalists who have questioned medical claims.

To my mind, one of the most chilling and sinister concerns the case of Danish researcher, Henrik Thomsen, who gave a presentation to about 30 scientists and doctors in the Randolph Hotel in Oxford. This meeting discussed the problems Thomsen struggled with in deciding whether or not to continue using a drug when there was the emerging suspicion that it was, in rare cases, causing terrible side effects. It is the sort of debate and discussion that doctors have all the time – and need to have all the time – but for airing his concerns, Thomsen now finds himself being sued by one the largest companies in the word: General Electric.

Being sued for libel in England is not something who should wish on your worst enemy. The costs are horrific – about 140 times higher than the average across Europe. Losing will cost you millions. Winning is nearly as bad as you can rarely recover all your costs and you may well lose your house. And winning is hard, as the burden of proof is dumped on you, the defendant, not your accuser. All the bringer of the suit has to do is threaten you with legal action and then watch you either creep away and apologise or vainly try to defend yourself. A rich opponent can just watch you ruin yourself – right or wrong. The concept of free speech appears to play no part.

Being truthful and right, whilst being in principle a legal defense, is no tactical defense against a libel suit. Most people back off and keep very quiet. A few have the stubbornness to see this through, as Simon Singh is doing against the Chiropractors.

The case revolves around a drug called Omniscan which is used as a contrast agent – a chemical that can improve the effectiveness of medical imaging techniques. As such, these drugs can be very beneficial. Better diagnostic images can give doctors a better idea of what might be wrong with you and so help you on your way back to health. But Thomsen was concerned, along with other doctors, that in a few very rare cases, contrast agents could severely damage people with kidney problems, resulting in a condition called nephrogenic systemic fibrosis (NSF) – a very painful condition where the skin thickens and tighten and confines people to wheelchairs. A good proportion die.

Thomson is not being sued because of what he said, but what GE Healthcare have chosen to ‘read between the lines’ in his presentation.

At present, no one knows for sure if NSF can be triggered by Omniscan, although the evidence suggests this is a strong possibility. Thomson reviewed 150 case of people with NSF and all had been given contrast agents. Various medicines regulators around the world are already warning doctors not to use these drugs on people with kidney problems. Thomson’s meeting was a discussion of the decision making process around how you should arrive at such a recommendation with only limited data. It is not easy – the drugs are obviously of benefit to many – but the risks to a few appear to be high. Decisions have to be made in the presence of much uncertainty. To wait until definitive proof arrives could jeopardise many more people. Medicine is full of such uncertainty and risk – and good practice comes about by critical appraisal of everyone’s ideas.

Innuendo means that although the words Thompson used do not actually literally state a libel, the reader would take the words to be full of oblique allusion to a defamatory meaning. We are now in a very different world. Thomsen is not being sued because of what he said, but what GE Healthcare have chosen to ‘read between the lines’ in his presentation. In their court papers, GE Healthcare do not pick out particular words that are being complained of (as with Simon Singh and his ‘bogus’ remark), but instead cite the whole presentation and claim that they are complaining about a meaning derived through imagining what Thomsen was really thinking.

Our laws need to protect the scientist who is wrong as well as the one who is right.

To be able to sue doctors because they discuss the potential risks of your products on the basis that you feel there were implied, unspoken disparaging thoughts is clearly wrong. Libel laws in the UK are broken at root, if corporations are able to bring such cases to court. It is imperative that scientist and medics are free to be able to discuss such matters without fear of financial ruin. The good health of people fundamentally depends on this freedom. And, importantly, with this freedom comes the right for scientists to be wrong, a good deal of the time, in their discussions. Even if Thomsen was wrong, he should be free to debate his views. This is why the GE Healthcare libel suit is so sinister and, basically, evil. People will die because laws like this allow interests to stifle debate on such important issues. There is much pompous talk by lawyers telling scientists that if they are right, they have nothing to fear. This is completely missing the point of what is wrong with the libel laws and what scientists should be free to do. Our laws need to protect the scientist who is wrong as well as the one who is right.

(You can see the original presentation and GE court papers here.)

It is staggering that the case has even got so far. Huge amounts of money have already been spent and it has yet to go to court. Up until today, Henrik Thomsen has chosen to remain quiet about the case. A wise approach given the seriousness of the situation.

However, today, there has been a rather remarkable twist. Henrik Thomsen has chosen to countersue. A few months ago I was twittering about this case and @GEHealthcare twittered at me to point to the following press release which was put out to defend their actions. I will reprint it in full as it will probably disappear this morning:

GE Healthcare has promoted a vigorous scientific debate about the safety of Gadolinium Based Contrast Agents (GBCAs), including Omniscan™ and we reject any suggestion to the contrary.

Like the many other scientists who have contributed to this discussion, Dr. Henrik Thomsen is entitled to express any and all honestly-held beliefs so long as his views as expressed are not knowingly indifferent to the true state of affairs.

GE Healthcare encourages such scientific debate but the imperative of a robust debate about the safety of gadolinium-based contrast agents does not license Dr. Thomsen to make knowingly false and inaccurate statements about GE Healthcare or its products. GE Healthcare initiated the lawsuit because, despite repeated efforts by GE Healthcare to engage in a constructive dialogue with Dr. Thomsen, he persisted in making false accusations that he knew were untrue. This action is intended to prevent the further repetition of those statements.

GE Healthcare has cooperated fully and actively promoted a robust evaluation of the safety of GBCAs in Europe, the United States and elsewhere based on the evidence and the science. We welcome the continuation of a principled dialogue about the safety of GBCAs.

With respect to the comments in the article concerning the Imaging Management article published in Belgium, this was a report of what was presented at the conference in Oxford and it amplified and emphasised inaccurate statements made by Dr. Thomsen during his presentation.

There is no need to invoke innuendo in this press release to see that GE Healthcare is calling Thomsen a knowing liar. The press release also appears to contradict the fact the GE Healthcare is using a meaning of innuendo in its claim. How can GE suggest that Thomsen made “false accusations that he knew were untrue” when they fail to highlight any explicit false accusations in their claim?

The Guardian reports this morning that Thomsen is angry and countersuing over these remarks. This tactic has a precedent in the infamous McLibel case, the ten year libel battle between McDonalds and two campaigning activists. It was a PR disaster and one McDonalds could not get out of as the defendents countersued McDonalds during the case. Even if McDonalds had realised the case was causing them untold harm, they could no longer back out as they were themselves being sued.

GE Healthcare now find themselves in a McLibel Gordian Knot. If and when GE Healthcare gain the insight that suing an academic makes them look like evil corporate bastards, they have no way now of quietly slinking away.

The situation is even worse in that there is a very important Court of Appeal hearing on the 23rd of February where England’s two most senior appeal judges, the Lord Chief Justice and the Master of the Rolls, will be looking at the Simon Singh case and deciding if his case can take a new approach where he can defend himself on more liberal grounds. The outcome is not certain in this appeal, but have these very senior judges on such a trial is very unusual and the outcome will have a big stamp of senior judicial approval on it. It could be that there is a major shift in how such cases are handled towards allowing a greater role for freedom of expression over the protection of corporate reputation – a very desirable outcome.

We shall watch this all with great interest.

If you feel strongly about this case then please support the Libel Reform campaign and sign the petition. There is a good chance now, that one way or another, that England’s insidious libel laws will be overhauled. Get your friends to sign too and let is get rid of this embarrassing menace from English courts of law.

And I hope to see you at the Big Libel Gig:

GE Healthcare drop the libel case and settle with Thompsen in a secret settlement.