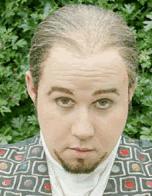 Paul McKenna, hypnotist, has fallen foul of the Advertising Standards Authority by claiming in print that his methods are ” … the most effective weight loss system available. Lose weight and keep it off … “.

Today, the ASA upheld a complaint and told him not to repeat this claim as he had failed to produce satisfactory evidence to support his marketing. His claims were unsubstantiated.

All this is pretty standard stuff for the ASA. Today’s rulings also slapped The Body Shop, for over the top health claims for various products, and an organisation called Ultimate Balance Ltd that offer hydrotherapy, a form of quackery that Charles Darwin was using 150 years a go.

Now, what struck me as interesting about this was that there is a school of thought that believes hypnotism depends totally on telling lies. Without the lies, hypnotism does not work. To understand this, we can look at the various opinions of what actually happens under hypnosis. In short, there are roughly two camps: the first contends that hypnosis induces some special state of mind in the subject that unleashes powers and capabilities that the normal mind state cannot tap into; the second camp contends that hypnosis is about inducing the belief that a special state of mind is being induced and that the subject acts out a role suggest by the hypnotist and the cultural expectations of hypnosis. With this second view, when therapeutic hypnosis is being employed, as with McKenna, hypnosis can be viewed as nothing other than a placebo, where the subjects’ expectations of an effect are sufficient to create an effect. As such, and as with all placebos, a lie must be implicitly or explicitly told and believed, and the lie is that the hypnotists can unlock special mental powers within you.

It gets a little bit stranger than that, in that subjects may well be aware that they are acting out a role or, alternatively, may genuinely feel they have been in a different mental state. The comedy Little Britain lampoons this knowing complicity of subjects with the hypnotist with the sketch character Kenny Craig. Craig is an “obnoxious, charmless man, …[who] has no worries about using his skills to get his own way”. His victims act as if they are hypnotised so as to not offend Kenny, for their own ends, or out of sheer bemusement. Of course, in reality, it is very difficult to know what is really going on within the minds of individual hypnotised subjects. Can we trust anything subjects say about their beliefs under hypnosis as their whole experience is layered with play acting, expectations and suggestibility?

The hypnotist Derren Brown gives a very insightful view of what his experiences are with stage hypnotism and what we can reliable say about what is going on in peoples’ minds. His scepticism makes refreshing and entertaining reading and is rare in this field. If this sort of thing interests you, I urge you to read his book Tricks of the Mind.

And so this ASA ruling presents a rather paradoxical and interesting view of how we should look at the claims of hypnotists. Maybe McKenna’s courses do allow people to lose weight. But to do so, it is likely that this is because his clients believe hypnotism will really help, whether or not it actually does – if you see what I mean. Telling people that his course is “the most effective weight loss system available” can be viewed as part of the hypnotic act, as setting the required expectations and as the paradoxical lie that must be told in any placebo based therapy.

Now, I know that Paul McKenna is not afraid of using his legal routes if he feels that defamatory things are being said about him, so I would like to be quite clear that I have no idea if McKenna believes he is telling lies or not. He could really believe that hypnosis is inducing a special state of mind in people and that placebo-like effects have nothing to do with his results. McKenna was at fault, remember, for not being able to substantiate his claims, not for lying or being untruthful.

But, if there is no such thing as ‘real’ hypnosis, then ‘sham’ hypnotherapy can be viewed as just one more placebo based alternative therapy that is essentially based on a delusion. It works (to some degree) if you believe in it. And just as with pretty much all homeopaths, the best alternative therapists are those that have fooled themselves into thinking that they have special powers, potions and incantations. It is so much easier then to tell the required lies to your customers if you don’t believe you are lying yourself.

Maybe many hypnotists really believe that what they are doing is nothing more than a placebo-based shamanistic ritual, and the required lies are justified to obtain a result. But within that stance is a whole other ethical minefield. Hypnotism presents the same dilemmas, as pointed out by David Colquhoun, regarding today’s reporting of ‘real’ acupunture being no more effective than ‘sham’ acupuncture. The fact that ‘sham’ acupunture (or ‘sham’ hypnotherapy) has an effect does not mean that its use is justified as both requre a lie to be told.

4 Comments on Look Into My Lies, Not Around My Lies