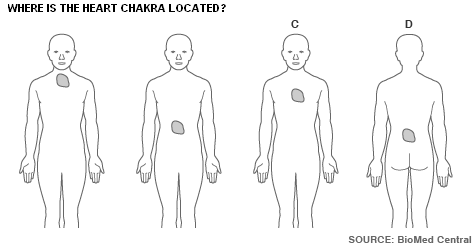 Many people in the UK are unable to identify the location of their major chakras, a study warns.

A team at the Institute of Magical Thinking found public understanding of basic alternative medicine has not improved since a similar survey was conducted 40 years ago.

Less than 50% of the more than 700 people surveyed could correctly place the anahata chakra, Moonbat’s Holistic Drop-in Centre says.

Under one-third could place their gall bladder meridian in the correct location, but more than 85% got their kidney meridian points right. 37% did not know what 37% meant.

There are concerns that the British public’s poor grasp of pseudoscience could potentially compromise the struggling alternative health industry.

WHERE ARE YOUR RENAL REFLOXOLOGY PRESSURE POINTS?

The researchers asked more than 700 people to look at outlines of both a male and female ear and identify which of several shaded areas corresponded to particular organs.

Those asked included apparently healthy members of the public and then people undergoing CAM treatment for blocked chi within specific organs.

Even those for whom the organ was particularly relevant often performed poorly – more than half of those with renal problems did not correctly identify the kidney’s auricular acupuncture points.

“We thought that the improvements in Sunday Supplement health bollocks seen since then, coupled with an increased media focus on quackery and growing access to the internet as a source of daft medical information, might have led to an increase in patients’ pseudo-anatomical knowledge,” said lead researcher John Warlock.

“As it turns out, there has been no significant improvement in the intervening years.”

There was little difference between men and women, although women did perform better in knowledge of made up chemical names for skin and hair products.

“There is a real problem with alternative health literacy – people’s ability to unquestioningly accept and process bullshit health information – which this study is indicative of.

“It really does matter, particularly as we look ahead to an NHS where NICE are starting to promote nonsense back pain treatments, like chiropractic and acupuncture.

“If people are going to use the NHS Royal London Homeopathic Hospital in an effective way they need to be able to understand just how important it is to keep their vital force in balance.”

Ellen Fluffhead, from the British Mountebank Foundation, said: “Ideally the public would have a better knowledge of the location of their crystal meditation balancing points than this study suggests.”

“This would hopefully produce a more meaningful dialogue with their high street charlatan when they start to feel vaguely in need of some self-centred, indulgent, nonsensical affirmation of their illusory sense of control in their otherwise completely vacuous lives.”

“However, it is ultimately more important to for us to know how to take money out of their wallets than for them to know any of this made-up rubbish.”

(With thanks to the BBC – Basic anatomy ‘baffles Britons’ )

The Meaning of the 10:23 Homeopathy Campaign.