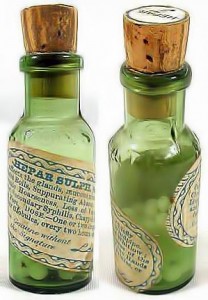 Like many parts of the NHS, Lothian Health Board had recently made the sensible decision to stop funding homeopathy. It made this decision after an extensive public consultation. However a 73 year old woman with arthritis called for judicial review of the decision. That review came down firmly on the side of the Health Board and homeopathic provision will not be reinstated. However, the impact of this decision goes well beyond the perceived needs of one individual.

As is reported in the judgement, the Board claims that the “real force behind the petition was a charity, not the petitioner [Honor Watt]. That charity was almost undoubtedly the British Homeopathic Association. As is noted in the judgement, “The British Homeopathic Association, a charity whose purpose is to promote patient access to homeopathy, has a campaign to save NHS Homeopathy.’ Their chairman appeared before the board to raise concerns before the decision was made to defund homeopathy.

The BHA is a charity that is closely allied with the Faculty of Homeopathy, the body that represents medical professionals who still insist homeopathy has a role in health care. In many ways, it is the trade union for this handful of eccentrics. These doctors stand to lose the most from the decision to defund NHS homeopathy. They are being squeezed out of public health care, and in many case, being forced to form their own private companies in order to carry on prescribing sugar pills for illnesses.

Whether or not the BHA was directly funding this legal campaign on behalf of the elderly woman, the impact of this decision on them will be devastating. Here is the section in the review, that in my opinion deliver s fatal blow to NHS provision of homeopathic services.

In any event, even if I had concluded that the Board had failed to comply with its PSED [public sector equality duty], I would have refused to reduce the decision under review.  It is plain that the Board, as it was entitled to do, accepted the view that there was no scientific evidence for the efficacy of homeopathy and that funding for it was a waste of the limited funds at its disposal.  In these circumstances the countervailing factor in this case was so powerful, indeed overwhelming, that no decision other than the one taken by the Board was conceivable.  A different decision, namely, to continue spending money on a service whose efficacy was not established, would have been unreasonable.

These are extraordinarily strong words. And damning for homeopathy. You might say that in other words, the case against wasting public money on homeopathy is so overwhelming that it did not really matter if the public review had been sloppy. That is a devastation result for the BHA and calls into question why any commissioning body in the UK should be funding homeopathy in any way whatsoever.

Another question arises. The BHA is a charity that is supposed to work in the public interest. If money was spent on this fruitless review and the BHA were clearly the driving force behind it using the elderly patient as a proxy, was the BHA acting in the wider public inetrest here? Or was it acting for its own narrow interests and the few doctors who continue to insist in using the magical form of 19th Century quackery?

The BHA have issued a statement saying how upset they are about all this. In full,

Lord Uist’s ruling dismissing the call for a judicial review of NHS Lothian’s decision to cease provision of its homeopathy service is a major blow, not only for the sick 74-year-old woman who was courageous enough to take on the health board and bring the case, but for all who believe in patient choice.

The basis for the legal challenge was NHS Lothian’s apparent failure to take into account its public sector equality duty in reaching its decision; specifically, its highly inaccurate assertion that patients who used the homeopathy service tended to be more affluent members of the community and therefore could afford to pay for the treatment privately – an assertion that the health board failed to back up with any supporting evidence. While ignoring this argument Lord Uist appears to have made a judgement on the efficacy of homeopathy which throws into question Lord Uist’s focus and objectivity in making his final judgement.

Naturally the British Homeopathic Association is disappointed by this ruling, but it must be remembered that the real losers are those patients in Lothian whose health has benefited from NHS homeopathy and are now being deprived of the treatment because, like the patient Honor Watt who challenged NHS Lothian, they cannot afford to get the care privately that they once received through the NHS.