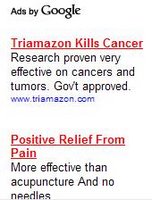 After yesterday’s raids by the MHRA on suspect dodgy pill sellers and their ‘Internet Day of Action’, perhaps one of the largest profiteers from such schemes will get away with it.

Google has been quite happy to take money from triamazon.com to show adverts for the site and the hugely overpriced food supplement pretending to be a miracle cancer cure.

Furthermore, by taking money for such adverts, Google will be in contravention of the Cancer Act of 1939 which says,

containing an offer to treat any person for cancer, or to prescribe any remedy therefor, or to give any advice in connection with the treatment thereof

People do get prosecuted under the terms of this Act. Trading Standards have a duty to enforce it. However, as Trading Standards tend to be highly fragmented across local councils, none of them appear to want to take on the Google giant. I believe Westminster Trading Standards as their UK address is given as,

However, Westminster undoubtedly have many higher priorities making sure dodgy plumbers do not rip off senile old ladies who live on Buckingham Palace Road.

I have complained to Google before about similar issues and also to Trading Standards. Ignored, so far. Google should be policing their own noble ‘do no evil’ terms, and if they cannot they should be prosecuted where they flout the law. Perhaps the MHRA, as part of their Internet day of action, could tackle one of the largest advertisers on the web. Google has the power to make or break such companies. The MHRA ought to be concerned.