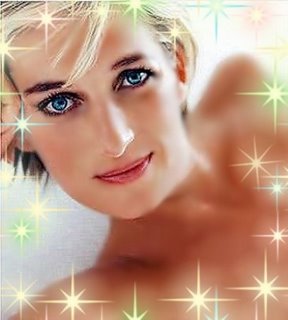 No, I haven’t gone all Daily Express on you. There is a genuine Lady Di connection here. But first, the Daily Telegraph.

We are told (May 10, 2008) how a man had a bad knee and how ‘laser acupuncture’ made it better again. Time for the Quackometer to investigate.

So, why do alarm bells ring? The Telegraph reports,

Last year I heard about a new treatment, called Fenzian, and decided to give it a go. Pioneered by Eumedic, a Berkshire-based company, it involves a hand-held electronic device that is passed across the afflicted area imparting low-level electromagnetic impulses into the skin. It has been likened to a non-piercing form of acupuncture.

‘Electronic devices’ that look really scientific and impart ‘electromagnetic’ things to the body are readily found in the world of quackery. They usually do nothing but allow practitioners to take hefty fees from customers. Is the Fenzian one of these devices? We must look more.

Apparently, the machine works by,

open[ing] a dialogue between the damaged part and the central nervous system, enabling the body to target its own healing powers more effectively.

Now that could be just flowery journalistic uncomprehending language. But if it is what Eumedic claim, then we could be in a spot of bother. One thing I would like to know is what is being said in the dialogue and what language is being used. Unfortunately, I doubt we will find out.

The next worrying aspect is that Eumedic appear to be relying on testimonials. An over-reliance on testimonials ought to alert us to the possibility that quacks are using anecdotes to convince people that their treatments work. (Check out the All-American Sports Stars.) But things look better when it appears that there is an actual written-up study of the treatment with 600 patients involved. There might be real evidence that the Fenzian works. The Telegraph reports,

[The study] showed that most felt they had been “cured”, though this was less evident among the older ones and those who had had symptoms for more than six months.

And hopes may be dashed. If the Fenzian was useless then we might expect those with new symptoms to get better soon anyway, but those with more drawn out problems to continue to have them. Is this paper for real?

The paper, entitled A retrospective case note review of the Fenzian electrostimulation system: a novel non-invasive, non-pharmacological treatment, is by J. Colthurst and P. Giddings. The study was of 600 case notes from one clinic. It was asking if the patients seen at this self-referred, private clinic felt better after a visit. As such, we cannot tell from the study if the Fenzian had any effect whatsoever. It is perfectly possible that people got better anyway. There is no control group, so we simply do not know what the Fenzian did. The criticisms you could make of this paper are exactly the same as those made of the Bristol Homeopathy Study. Funnily enough, both papers report a 70% satisfaction rate.

The authors themselves note that “conclusions that can be drawn from the findings are limited.” However, they go on to rather optimistically conclude, “these preliminary results are highly encouraging”. I would add that if all 600 patients had paid the initial £350 as the Telegraph correspondent, followed by 15 follow up visits at £150 a pop, a more justified conclusion of this paper might be, “these preliminary results are highly financially encouraging”.

My doubts grow even stronger when we note that the lead author of the paper, J. Colthurst, is the owner of the clinic and inventor of the Fenzian. So, the paper can hardly be looked upon as an independent review of the technique. More troubling aspects arise when I note that a Professor Kim Jobst helped with the paper. Jobst has turned up on the quackometer before as an advocate of the highly dubious qlink magic pendant.

More scary things are in the paper, such as the appeals to NASA/Military/Russian/Secret authority,

Research by the Soviet aerospace and military scientists found that rapid changes in skin electrical properties occurred during acupressure, and that the sites of valuable response often correlated with known acupuncture sites. Regrettably, because of the secretive culture of the Soviet military, none of this research was published.

Such claims are always highly doubtful and impossible to verify – but sound very impressive.

So, who is the inventor of the Fenzian and author of this paper? Dr James Colthurst MBBS; BSc; MBA; MFHom; FRCS(Ed) is an ex surgeon, educated at Eton and St Thomas’s Hospital Medical School, University of London. He is the second son of Sir Richard la Touche Colthurst, 9th Baronet Colthurst of Blarney Castle, and a capped English rower.

Colthurst is an intriguing character. Having the double misfortune of being second in line to the Baronetcy and loosing a bundle on the Lloyds markets, he found himself studying for a business degree (MBA) and then setting up a private clinic in Berkshire. Beyond his medical career, we find out that he was a close childhood friend of Diana and he turned out to be the paid for ‘middle man’, supplying the Diana tapes to Andrew Motion for the book that ‘blew the lid off’ the royal marriage.

Colthurst has a history of investment in alternative medicine. He is proud to claim that he is only the second surgeon to train in homeopathy and join the Faculty of Homeopaths and he only surgeon with an MBA. The Telegraph lists him as one of their Top 20 health gurus, just above Patrick Holford.

He also looks as if he has been dabbling in electronic gizmos for a while now. It is claimed he was one of the fist people to use the SCENAR device in the UK – a box remarkably similar to the Fenzian. The SCENAR was

developed by Russian scientists to ensure that cosmonauts stayed fighting fit as they floated in the stratosphere[sic].

Another user of the SCENAR, claims to be trained by Colthurst and says the device was,

developed in Russia in the 1970s to get wounded Soviet soldiers back on the battlefield as quickly as possible.

In April this year, the Washington State Attorney General, Rob McKenna, wrote a letter to the US FDA to urge them to curb bogus medical devices such as the SCENAR. He said,

The sale and use of untested medical devices is a national problem. We encourage you to ban the manufacture, distribution and use of these dangerous devices, to step up enforcement against those who are taking consumers’ money and risking their health.

Colthurst has other electronic device interests too. He runs a web site called muststopsmoking.com. For this service, you will be charged £250 and plugged into a Bioresonance device that “recognises the echoes of toxins and asks your body to ‘re-set’ itself.”

The ‘output’ signal from a cell can be considered as a resultant of the healthy cell waveform and the frequency of the toxic substance.

Bioresonance aims to measure the waveforms and to be able to separate disharmonic (toxic) waveforms from ‘healthy’ signals. A process of phase-cancellation is then used to counter the toxic waveforms. In addition, another process is used to amplify the healthy waveforms, thereby re-setting the cellular harmonics.

Now, we have seen the Blarney-stone-kissing, gift-of-the-gab, silver-spoon-in-the-mouth, side of the family, but on his mother’s side there is a more interesting relative. He is the great-grandson of Sir Almroth Wright who is something of a medical hero. Wright was an early pioneer of immunisation, inventing the process of autogenous vaccination preparation and was probably responsible for saving millions of lives through the development of the typhoid vaccine before the First World War. He worked with Alexander Flemming on the treatment and cleaning of wounds to prevent infection and battled fiercely with the ‘Harley Street Ethos’. He campaigned to set up a government centralised fund for performing medical research so that it could be taken out of the hands of private practice. This action led Lloyd George to set up the Medical Research Committee (which later beacme the Medical Research Council).

In a biography of Shaw by Hesketh Pearson, it is reported that,

Bernard Shaw called upon Sir Almroth Wright – a noted allopathic physician – to look into homeopathy. Wright expressed complete incredulity. Shaw remonstrated with him. “Look here,” exclaimed Wright, “the thing is absurd and impossible; let me put it this way. Would you, Shaw, trouble to get out of your chair if I called from the next room, ‘Do come in here and see what I have done – I have turned a pint of tea leaves into pure gold.’?” “Certainly I would,” replied Shaw. “

Shaw’s credulity stands in stark contrast to Wright’s sceptical attitude. Homeopaths see Shaw’s response as being more ‘open minded’. Sceptics see it as an over willingness to believe in anything in the face of illogical nonsense. Indeed, Wright was supposed to have proposed that logic was formally taught to doctor’s as part of their training. His ideas were ahead of their time and rejected.

I wonder what he would make of his descendant? My guess is that science may well have advanced, but society has not.