The homeopaths, like Dana Ullman, treat original scientific works like scripture – as a source of truth. Their own Hahnemannian scriptures trump scientific knowledge and evidence at all turns. This fact exposes their pseudoscience. I bet the majority of practicing biologists have never read Darwin’s Origins.

Homeopaths like the authority of scientists, celebrities and politicians. It gives them a source of validation that is independent of the reality of the world. But in doing so, they abuse truth and Darwin has been roped into this misadventure. Charles Darwin’s letters have been thoroughly abused in an attempt to show that he was a supporter of homeopathy and I have shown how this is utter nonsense.

More manuscripts are now online and we can can see writings about Darwin from his colleagues and families. A biography by his son reveals this snippet and I thought it worth sharing as an insight into the man, his illness, and his mischievous humour.

Besides the holidays which I have mentioned there were his visits to the water cure. He began in 1849 when very ill suffering from constant sickness. He was urged to try to water cure by Fox (or Sulivan) and at last agreed to try Dr. Gully’s establishment.1 — His letters to Fox show how much good the treatment did him: I fancy he thought that he found a cure for his troubles, which but like all other remedies it had only a transient effect on him. However he found it at first so good for him that he built himself a douche when he came home, & Parslow learned to be his bathman. He thought Dr. Gully a clever Dr but I do not think he liked him. He was repelled by all the homeopathy & spiritualism that Dr Gully favoured. — He so far humoured Dr G. as to allow himself to be examined by a medical clairvoyante. who This person who localized the mischief in the stomach, in doing so he followed as my father believed some unconscious hints from Gully or his assistant.” It was I think to this clairvoyante to whom my father offered a £5 note if she could tell him the number. She scornfully refused demean herself in such a way…

Another quack who refused to be objectively tested! 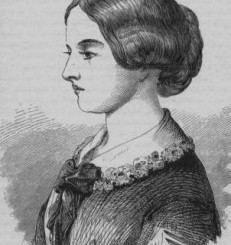 On the The Reckless Physicking of Amateur Females.

18 Comments on A Footnote to Darwin and Homeopathy