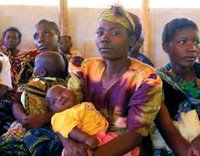 Peter Chappell (10 Canards) is a founder member of the Society of Homeopaths, he is a Fellow of the Society and has written several influential books on homeopathy. He describes himself as an inventor and a visionary, a charity worker and teacher. He also appears to be dangerously deluded.

Chappell makes his name by producing his own homeopathic preparations. His idea is to produce specific remedies to cure named diseases, despite this being very much against the rules of the Society of Homeopaths. His breakthrough is something called ‘resonance healing’. I think you have to buy one of his books if you want some clues as to what this is. Apparently, he only ‘partially reveals’ methods. Cunning.

Peter Chappell’s PC Remedies are clearly not normal homeopathic remedies. Whatever they are though, the Society of Homeopaths appears to want to give his ideas a big airing as they are being discussed at a special SoH symposium to be held in December 2007 in London on the treatment of HIV/AIDS with homeopathy. Chappell advocates the use of his remedies on his website. You will have to log in as a homeopath and answer secret questions that only a homeopath could answer to view this stuff, but it is well worth it (clue: Hahnemann, Kent, Pulsatilla). You will also have to offend the souls of your ancestors by ticking a few declarations, but in order to find out how prominent homeopaths are advocating mad treatments in Africa for deadly diseases then I think my gran will understand.

Chappell is selling remedies for not just AIDS, but just about everything including:

This is what he says about his HIV vaccine:

This is my attempt to produce a vaccination. No one has tried to use it yet, I think. The ideal scenario is to give it to teenagers in one village and watch the HIV rate over a year compared to a similar village. It should be given daily for a month. That’s it.

Now, as with all homeopaths, what Chappell is missing is the slightest bit of evidence that anything he is offering is effective. He makes staggeringly bold claims, such as “it works in urgent situations in seconds or minutes. ” For his AIDS work he says,

we have no proof in scientific terms that the AIDS treatment is effective, in practice it is very reliable and thousands of people have recovered

This is difficult to understand. On one hand he is quite clear he has no evidence for any healing claims but then says it works anyway. This is typical homeopath double-think. There is the belief that scientific evidence is only one form of evidence when in reality it is the only sort of evidence that is justifiable to use when playing with the lives of desperate people. For homeopaths, their personalised ‘evidence’ of anecdotes, delusions and wishful thinking trump real objective evidence – and that is why they are deadly dangerous. The behaviour of homeopaths cannot be constrained by reason. People who are fooled by this narcissistic nonsense will have deaths on their hands.

But Peter Chappell FSHom does not stop at African healing delusions. He has another web site where he claims that he can capture his homeopathic resonances and implant them in mp3 music clips that you can listen to and download. Healingdownloads.com gives you a free sample, but then you have to fork out for further remedies. But, apparently you can cure pretty much everything including cancer. This is almost undoubtedly in breach of the Cancer Act of 1939.

The resonances are not audible of course. You just get some jazz clips whatever illness you have. Also, there is some special ‘copy protection’ to stop you healing your friends without paying. Damn. Don’t you hate Digital Rights Managament? In his FAQ, he acknowledges that all this is pretty difficult to believe,

When Faraday suggested electricity and magnetism were connected, the scientists scoffed.

Yes, people find it hard to believe when claims are made that Elvis is still alive, the moon is made of cheese and sane adults can really believe all this homeopathy nonsense.

Chappell makes great play of all this being done for charity. If money is not the answer, then why not start broadcasting resonance-loaded tunes over Nairobi radio, or distributed via iTunes?

After all this, I just have to wonder what a homeopath would actually have to do or claim for the Society of Homeopaths to actually take action, strike off and disown one of their fold?

10 Comments on Will Homeopathy and iTunes Cure AIDS?